Description
Take Two invites you to the launch of their debut EP - PAIRS - on 18 April at the Aliwal Arts Centre!

Coming off the back of overseas stints in Malaysia, Thailand and Spain in 2014, the pun-loving, indie-rock quintet has since been busy with their first effort, the five-track EP entitled PAIRS.

Touted to be their most elaborate show yet, the EP release showcase will have the band performing their singles, "Ariel", "Always Been Right Here" (#5 on the Singapore iTunes Charts) and "In Your Arms" (released 7 April) with their trademark energetic swagger. With a full light show and visuals conceived by local DJ, Keith Chia, as well as fellow indie quirk-rockers Stopgap as special guests, the Aliwal Arts Centre looks set for a visually-extravagant, sonic adventure.

Get your tickets now! RSVP - https://www.facebook.com/events/729518303833811/
All EPs sold during the launch will be a special launch edition of 'PAIRS', complete with bonus tracks and hand-signed by the band members. Limited to first 200 copies only! 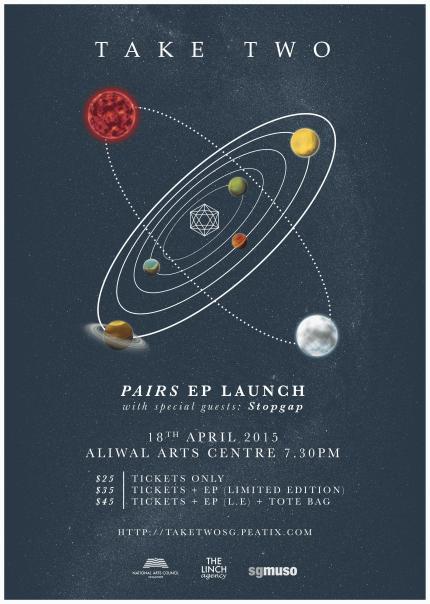 Tickets will be sold at $35 at the door, non-inclusive of the physical EP

*Merchandise will be sold at special prices!

About PAIRS - the debut EP

An eclectic collection of songs inspired by the band's trials, travels and musical exploration, PAIRS combines indie-rock goodness with lush harmonies, jazz-haunted instrumentation and a dash of electronica.

The 5-track EP opens with the soaring, island-pop anthem, "Always Been Right Here", before rip-roaring into "Top Man" - an indie-rock jam with enough teeth in it to be aptly described as a Two Door 'Dinosaur' Club tune.

Proceedings then ebb into "Plantations", an introspective slow-burner on escapism, followed by the sensual, cruising ballad, "In Your Arms". The album concludes with the latin-funk inspired dance number "Luna", with indie-jazz-rock single "Ariel" making an appearance as a bonus track.

A clutch of songs as eccentric as the star system in the album art (designed by Marcus Lim of The Sets Band), PAIRS is ultimately held in orbit by the band's rich instrumentation, nuanced pop-sensibilities and passion for good music.

PAIRS was produced by Roland Lim (Gentle Bones, Reuby & The Summer State), with support from the National Arts Council (NAC).

Directions
Aliwal Arts Centre is easily accessible via public buses along Beach Road and Victoria Street, and is 400 meters away from the Nicoll Highway MRT station (Circle Line). Other nearby MRT stations are Bugis and Lavender (East West Line).

Want to find more groups and events like this?